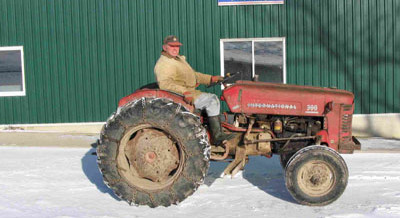 “The all-duty tractor with heavy-duty performance” according to  the literature that I purchased this summer at a show in Illinois. The reason I’m writing  about this tractor is because my Dad had purchased a new one years ago and it is still here today doing routine work on our 500 acre dairy farm.
I was a young boy when the International 300 utility was delivered to our farm  of 100 acres. The farm produced cream from the cows, and pigs were fattened with the skim milk with lots of grain. The tractor was driven to the farm by the mechanic from the dealer ( Ross Doble Inc). He asked me where my Dad’s tractor was, and I told him it was in the shed. He told me he was going to leave  this shiny new red tractor and take the old tractor. The old tractor being a Farmall H which my Dad had bought used at an auction when he started to farm in 1954. I thought my Dad was getting taken because the Farmall appeared to be a lot larger than that little red tractor that showed up that day. That little red tractor  did all the heavy field work on our farm for years until 1968 when our first diesel tractor was purchased.

A fast hitch 3 furrow plow  was added that same year and all other equipment was made do until  the forage harvester appeared. Every one was amazed at how the International 300 utility could cut corn in second gear.  When the crop was heavy or going up a steep hill the TA was pulled and the 300 just kept on going. Dad custom silo filled with the 300 and an Allis-Chalmers harvester, trough blower and 3 wagons. He would start with his own silo first, right after Sunderland fair and cut corn most of the fall. Most of the silos at  that time were 12×35 and the odd one still made of wood. One of the largest jobs that he had was filling two 14×40’s, it took all week.

The corn was tall with not much cob on it according to my Dad. 8 acres would fill a silo provided snow fence was added to the top of the silo or it was refilled at a later date. Other tractors used when silo filling was a Farmall Super H or a Massey Harris 33 on the blower and wagon tractors consisted of International 300,   W 4, Farmall H and Massey Harris 22 or a Farmall Super C as I recall. When the forage outfit showed up at my Granddad’s farm the John Deere D was put on the blower, no shortage of belt power there!

My Granddad’s D is now in my collection of restored Farmall’s and starts with just a couple rolls of the fly wheel . But the International 300 was the big power of the day driving the forage harvester. I would come home from school and go out to the field where the 300 was cutting corn, just to watch. It had lots of power to drive the harvester. It sure liked lots of gas according to the line up of gas cans in the fence.

I recall a day in late October when Dad drove the 300 up the lane with the forage outfit, blower and wagons trailing behind the harvester as he was finished for the season. The 300 was covered in mud due to poor harvesting conditions that fall. The oil was changed and all the neighbors came to haul out manure with the 300 loading all the manure.  The fast hitch plow and heat hawser was put on and plowing continued for the rest of the fall. Once a week, a belt pulley was attached to the back of the 300 and belted up to a Gehl hammer mill to grind feed for the pigs and cows. My Granddad had a sawmill which they drove with a Farmall H with limited results, just not enough power. The International 300 was driven 14 miles to the farm and belted to the mill, now they could saw lumber!

But the 300 had to return home often to tend to tractor  chores at home as it was the only tractor on the farm. This is when my Granddad purchased the John Deere D strictly for doing belt work. Snow removal was a big issue back in the sixties with mounted snow blowers being the latest technology. A home made snow blower was attached to the fast hitch with the aid of live power take off , TA, tire chains and of course the heat houser, the International 300 Utility was once again out on the roads doing custom work.

We used to be driven to the rural school on the next concession and one of our neighbors got his push button Plymouth stuck in our lane. The 300 blew out the lane but the car had to pulled out of the snow. As the tractor began to pull the car the chain broke and the slip hook cracked the windshield and finally landed on the hood of the car. I was sitting in the middle of the front seat of that Plymouth when I seen that hook coming at me. Dad always collected the money each time he cleaned the lanes. I would go with him on Saturdays. There was one lady that would complain that $2.00 was too much money to clean out the lane, Dad offered her money back and told her he would go out in the field and blow the snow back into the lane, problem solved.
The 300 utility was the first tractor that I ever drove. At a tender age of 6 my job was to drive the 300 while picking up the hay bales, which is much too young by today’s standards. I wasn’t strong enough to push the clutch down, so the 300 was driven in TA to release the pedal pressure. The 300 Utility was equally at home in the sugar bush.  A couple of 2×6’s were stuck into the fast hitch and a platform nailed down to hold a 45 gallon drum, and sap was gathered for the evaporator. The ruts on the trail got really deep after the frost came out, sometimes the front axle would go out of site going through some of the deepest mud holes. Eventually a 100 gallon tank was mounted using the fast hitch assembly but front weights had to be added to the front for safety. Now it just sits in the shed as plastic tubing collects the sap.
Round baling was done with the 300, not the round balers of today but the Allis Chalmers roto baler.  The tractor had to stop every 50ft or so  to put the twine on and eject the bale. It was a great way to preserve hay as they didn’t have to be put in the barn right away. With all that starting and stopping, clutches were put in the tractor every 2 years. A fast hitch cultivator was purchased at the farm auction where we purchased  our 2nd farm.  A few weeks later, my job on my birthday was to cultivate and so I did, with the 300 that was now 10 years old  and a fast hitch cultivator and section harrows behind. I put 3 tanks of gas through the tractor that day  cultivating 24 acres.  That was a big days work for confederation year. The neighbors 300 didn’t sell at the auction so Dad had rented it for the year  as we had 2 farms to work now. The retired farmer passed away with cancer and his International 300 utility, plow and  Sedore manure loader was purchased prior to his death. His wife admired myself and my sister as they never had any children of  their own, she gave me Ken’s vest that he wore very little and a tie clip and cufflink set which had the 300 utility embedded on them. The vest is long gone but the cufflink set will stay with me forever in memory of a good neighbour while growing up.
As time wore on, the 300 was just about traded in on our second new IH diesel but a last minute decision to keep the tractor  was made to pull wagons which it did for many years to come. The old 300, now on its 3rd overhaul makes its first debut at the Schomberg tractor pull. The announcer still talks about the  300, how a little tractor could have so much power and stay right up in the winners circle with much larger Farmalls and Olivers.  At the Sunderland tractor pull the Old 300 tied for 1st place up against a Farmall M that the Richards boys had brought from Stouffville. I was quite happy to place 2nd in a pull off, but as luck would have it, it pulled 8ft further than that big M to capture 1st prize in the antique division. It sure made my day and was never forgotten. The old 300 has since been retired back to farm duty with a bigger more powerful IH puller competing at the pulls now.
As the new 5088 International arrived on the farm just months before the merger with Case, the International 300 utility has now earned it place in the shed. 27 years of faithful service, 3 motor jobs, rebuilt TA’s, countless sets of tires and clutches, bangs and scrapes in its original paint. I don’t know how many hours are logged on the tachometer as the tach broke at 3300 hrs. when I could barely push the clutch down as a young boy.

As the saying goes “A boy never forgets the first girl he ever kissed and the first tractor he ever drove”, well we all know what tractor that was, the girl, although not my wife but a good neighbour and pillar of  the community. But when there is a thunderstorm brewing across the swamp and there is a load of hay sitting out in the field, it’s the International 300 Utility off to the rescue to pull that load of hay right up into the barn just like it did back in 1957.